Finally lands in Rome the Australian cult thrash / black metal band !
Among the most significant acts in the extreme metal, with albums that have confirmed their status as hard-liners in the genre , they bring in their latest tour, the appreciated "Wildfire", after seven years from the last "Defiance ".

With them the Sudden Death, Capitoline band, well-established reality in underground scene. After some line-up changes the death/brutal combo was able to bring to light their third album "Monolith of Sorrow" which is getting rave reviews in the industry. 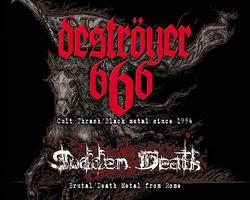